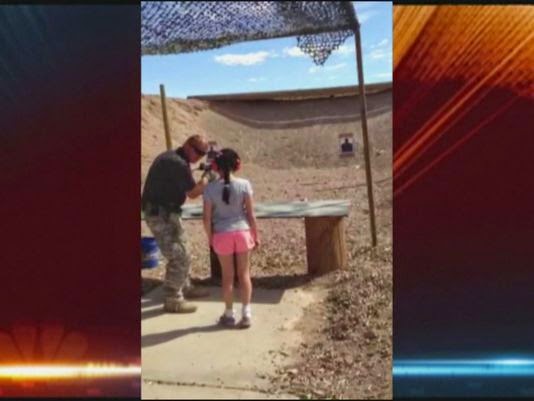 DOLAN SPRINGS, Ariz. -- A shooting range instructor in Arizona was accidentally shot and killed by a 9-year-old girl who was learning how to shoot an Uzi, authorities said on Tuesday.

Charles Vacca, 39, was teaching the girl how to use the automatic weapon on Monday morning at the Last Stop outdoor shooting range in White Hills, Arizona, when she pulled the trigger and the kickback caused the gun to lurch over her head, investigators said.

Vacca was hit by a stray bullet and airlifted to University Medical Center in Las Vegas, where he was pronounced dead late Monday. The girl was at the range with her parents at the time, but their names were not released.

Sam Scarmardo, the manager for the Last Stop's shooting range, told NBC News that "the establish practice at most shooting ranges is 8 years old and up with parental supervision."

He said Vacca was a "great guy, with a great sense of humor" and called him "very conscientious and very professional."

Scarmardo said that the range has never had a similar incident in over a decade of being open — "not even a scratch."

This is a shame but guns are not toys and a 9 year old should not be shooting a fully auto weapon. IMHO

Rediculous. This place and places like it need to be illegal.

1:43 Learn to spell... and No, they don't. The girls parents should be charged with endangerment of a child. I'm a huge proponent of teaching children basic firearm safety, with firearms they can hold properly, and control through firing. They had this same thing happen years ago, where a child triggered an Uzi, and it came back and shot him in his face. The instructors hands should have never left the firearm, until knowing she could handle the recoil of a fully automatic firearm.

The parents are at fault, but so is the instructor for being careless, and allowing this to occur. He paid the price.

This is not the child fault. But with a recoil of an Uzi, the instructor should have been behind the little girl with his hand on the gun with the child. Who does this? A child with an Uzi.

9 year olds don't need to be handling uzis. A 22 is plenty to introduce them to firearms.

For ONE - ALL of you need to get your facts straight. This business is NOT in Dolan Springs, AZ. It is located in White Hills, AZ.
TWO- The shooting range has been in operation less than 4 years. (Not 10 or whatever the ignorant news is reporting.) Prior to that, it was owned by a foreign company and called 'Keepers of the Wild' - Supposedly a sanctuary for exotic big cats.
THREE- THE OWNER/OPERATOR, SAM SCARMARDO, is a discriminatory, sexist, racist, EX-FELON (who, by federal law, is not supposed to be in possession of ANY FIREARMS!!!
When did people stop researching anything?!?!?

Come on people, do your research. How could you not know all this. Most of you probably just thought it was some idiot trying to teach a 9 year old girl to shoot a fully automatic weapon.

Poor girl is going to be scarred for life now thanks to her idiot parents and an incompetent instructor who basically killed himself.