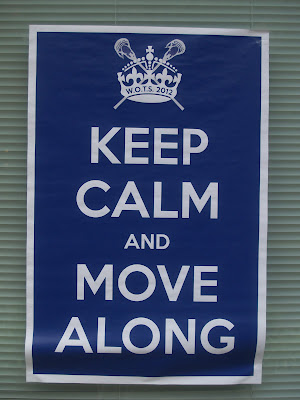 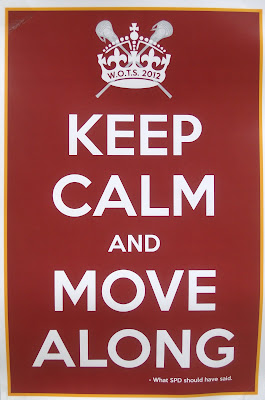 The signs above were placed on windows Downtown on 3rd Friday. Click on the bottom photo and when it enlarges you'll see, "What SPD should have said".

Obviously SU Students were trying to make their mark on Ireton's night out but it wasn't until I called the Mayor's Office yesterday in which I suggested someone come down to the Plaza and remove these posters. They are now gone.

Did businesses allow these posters?

7:34
What businesses? This was downtown lol

why have them removed?

I attended the SU graduation at the civic center. Dudley-Eschbach alluded to the incident telling students they should ALWAYS speak out against what their education at SU tells them is wrong.

Boo hoo. College kids continue to complain about being treated like animals when they refuse to stop acting like animals. I got a newsflash for you: Throw bottles at the cops, and they'll mass your sorry butt. I'm guessing the posters are the last thing they did after failing finals and skulking back to mommy and daddy's house in Jersey to get drunk and be a dissappointment.

Jersey? I thought all the idiots were from PA. Maybe that's just in the Pines and OC.

If the posters were put up with permission, the city (mayor) is liable for theft and destruction of property.
A constitutional no brainer.

And, the message is completely on point.
Cops LOOK for excuses to open their little can of beat down.
I hope someone around here teaches them a lesson soon.

I did not see one thing thrown in any of those videos that can be PROVEN it was a bottle. Also when one cops was put on the spot by more than 5 students he states he started spraying because "this girl told him too". The cops were wrong and you can say the students are crying blah blah but if your child was maced for being at a party in which he or she may not even have known was being broken up by the cops you would be pissed too.

What has this world come to when you have to ask to put up a stupid flyer on a building.

i witnessed 2 bearded hippies in their late 20's / early 30's taping these signs on some windows downtown around 4 pm Friday . i stopped to talk to them and they were sooooo smug. really smug & they thought they were soooo clever. one of them gave me a d.c. united lapel pin. a nice gesture but he was really smug about it.

I say spray all college students so they know when the cops show up with spray, they know!

I think they were put up by the homeless guy that lives by the bridge in an effort to tell the world his life philosophy.

I bought one of those posters a little shop Downtown. They were selling them for $10 each and they told me that if I bought one the "proceeds" would go to benefit the families of those students who lost their lives in the melee at Cedar Commons last month.
When I got home I found out that nobody actually died, just some pepper spray and beer bottles. I felt really duped. It's hanging in my bathroom now next to the medicine cabinet.

It's a funny way to get the message out. The kids were creative, non-destructive, and non-violent. I'm proud of how they chose to express their frustrations.

I bet that if Ireton and/or Duncan calmly walked in, and explained to groups what the problem was and how leaving peacefully is a better alternative to a flood of angry cops, the kids would have gone inside their homes or walked away. They are by no means stupid, even when intoxicated. At that point, the situation is diffused. The kids don't get slapped with a record, the cops aren't put in a tough judgement call, and nobody suffers from being in a dangerous situation. Everybody wins by making the best of a scary situation.

Using hard power isn't always the best way to do things. Persuasion is often a more effective display of power at the end of the day.

Note that I'm not trying to take any sides. I wasn't there. But I do feel sorry that both sides lost on that day.