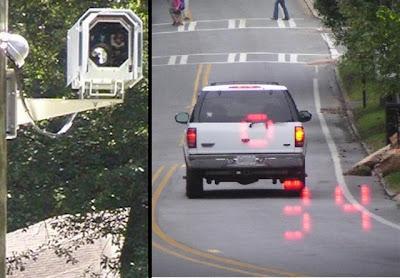 There are a few new speed cameras now in place in Salisbury. The biggest one you need to know about is the one on Rt. 50 near Arby's. It is in place but know this, they will NOT be operational for another 10 days, give or take a day or two.

A Press Release will become available some time mid week next week but in the mean time, start slowing down and get used to them.

Salisbury News has also learned the Maryland State Police will be installing FOUR traffic light cameras around Salisbury as well. These cameras will be used to read license plates.

I am told these cameras are very effective in catching wanted people and the Police can respond immediately to the system picking up on someone who is wanted driving through Salisbury.

Remember Folks, as much as we may feel like this is an invasion of our privacy, driving is a privilege and these roads are state roads.

That being said, have at it in comments!

Noticed the one being installed on Rt 50 day, bout the same time a school bus flew past me. I hope school buses wont be exempt from the cameras/tickets. We need to know if our children are being safely transported.

for all of the arguing about the matter - if you don't break the law, you have no worries

‎"The smallest minority on earth is the individual. Those who deny individual rights cannot claim to be defenders of minorities."
-- Ayn Rand

Driving a privilege? One which we pay for dearly.
Why should we pay to drive? Park?
On roads WE ALREADY payed for and continue to pay to maintain?
What are they doing with the money they collect??

Just another reason to avoid Salisbury!

@4:22PM sure obey the law and you have nothing to worry about, how many Jews said that in Germany in 1936?

for all of the arguing about the matter - if you don't break the law, you have no worries

Glad to see them up, especially the cameras that catch the licence plates of criminals that drive around WANTED..Get theses thugs and not paying there ticket idiots OFF of the town and county's ROADS, keep up the good work Chief.

I paid the fine I just received and I did it no bull and I wasn't happy but I did it so I paid. Glad for the sort of "busy work" that kept police off things that were festering into problems

As if someone needed another reason to avoid Salisbury!

Joe,I think you said once "Mike tell us the last time a child was struck?" Did you ever get an answer? (^_^)

it's interesting to see people's desire to ignore the enforcement of traffic law - I wonder then, what other laws should be optional? Do we just leave this up to each individual to govern themselves?
seriously... comparing this to Nazi Germany- get real

The police are required to do that "busy work" because of people breaking the law by speeding. Speed and get caught you pay the price. Speeders should stop blaming LE for their own mistakes

How many unsolved murders in Salisbury over the last 5 years. And they worried bout some damn spreaders. Smdh

Little by little,Wicomico County is becoming the Montgomery County of the Eastern Shore. Congrats!

For all you "don't break the law and you have nothing to worry about" Nazi sympathizers --- the CITIZENS would generally be happy if only the PUBLIC MASTERS were held to the same standards AND PENALTIES as the rest of us that DON'T have a gun and a badge and carte blanche to pick and choose what laws THEY have to obey, and other PUBLIC MASTERS who will allow it to happen (I'm talking to YOU, Mike Lewis). Remember all the cops who were caught with the speeding cameras in Fruitland? While taking their kids to school and going out for groceries. In a police car. Just make sure YOU (we, the people) OBEY and you'll be okay. Its REVENUE. MONEY. Moolah. It AIN'T about safety as, a prior poster (6:23) pointed out when questioning the accident records. Quit falling for the "official" propaganda and start 1)thinking for yourselves, 2)remember the country you live in and 3) read the Constitution (and TRY to understand what it means. Seig heil! Now, pass me your wallets and your liberties. Thank you. Now please get on the nearest rail car. And if you reply, use your name you cowards --- or are you afraid of something???

I just returned from Florida. There, they have overhead cameras for collecting tolls for their toll road. The sign on the road stated that a bill would be mailed to me (haven't got it yet). I suppose they could include a fine of speeding too if they wanted to (and I was speeding).

That's why everyone should invest $100 for a Radar Detector.Picks up everything .5 to 1 mile out.

Get money from those evil drivers. The Constitution be damed. Its for the children.

Joe that's mean and damn funny at the same time!

Invasion of privacy, I don't think so, obeying the speed limit, what's wrong with that. Driving is a privilege, responsibility is with the driver, do the speed limit, it's that simple. Just maybe a life may be saved...

for what its worth said...

mr albero
thanks again for keeping us informed of more big brother tactics!!! they are gonna make tons of dough at the ward street and 50 location. if they want to put a camera up let it be at 50 and nanicoke road when west bound traffic is turning left onto nanicoke road. i guess because these people live on nanicoke road it gives them the right to go on red even when the east bound 50 light has turned green over 5 or more seconds. they just keep going.

Yea, i'm not driving any more or at least as little as possible. Who can afford gas, tags, title, insurance, etc... anyway. You happy motorists have at it but i'm on my bike and spring is in the air. Getting lean and saving the green. I even take a cell call sometimes and i never wear a helmet.

Yea, i'm not driving any more or at least as little as possible. Who can afford gas, tags, title, insurance, etc... anyway. You happy motorists have at it but i'm on my bike and spring is in the air. Getting lean and saving the green. I even take a cell call sometimes and i never wear a helmet.

You're just a rebel aren't you? Got your cell phone and no helmet. You're really living on the edge. Wow. I'm scared of you. Better roll my windows up and lock the doors.

..Get theses thugs and not paying there ticket idiots OFF of the town and county's ROADS, keep up the good work Chief.

You ahould get a ticket for your horrific use of grammar and not making a clear point.

Calm down when you type. Take a breath. READ what you are sending in. Makes life better for ALL of us. Thank you.

Does this pertain to the City, State & County police that amase me with the rate of speed they travel? That's a group that needs a talking to.

Driving is a privilege, responsibility is with the driver, do the speed limit, it's that simple. Just maybe a life may be saved...

Drivng is really a right for all americans.

They call it a privilege instead of a right because if it was classified as a right, they would have a much harder time taking you license (right) away.

Everyone has a right to drive if they do so in a safe and prudent manner.

Traffic laws ARE necessary. Just look at the idiots on the road who THINK they can drive.

And traffic laws are also a cash cow for the government. You can deny either or both all you want but we know better.

I don't think things will ever change, and for that reason, people's attitudes will also not change.

Cops will always be the dirty rotten sob's who write their mothers a ticket. (but yet can't seem to follow the law themselves)

No sympathy for you guys.

so we can all sleep alot safer now that cameras are doing what the cops can't do. so now the cops can focus on real crime and catch all the murdering dry dealing thugs, correct? I don't think so! some of you people are down right foolish in your thoughts on this blog! it's all about the money! not catching criminals or speeders! Just a bunch of idiots! and those who wrote about staying out of salisbury are absolutly right! I will not be going to any neighborhoods that have these cameras! and no I am not a law breaker. it's a matter of not wanting my movements being tracked and watched by big brother!

I'm just gonna drive like the cops do!!! I wonder how many tickets I'll get

FOR THE PEOPLE said...

In reading all of the posts...I hear alot about law enforcement... and I agree but, no one has mentioned how these cameras became authorized... if not for the local elected officials voting for these cameras, they would not be there...

We always seem to be angered by those we put in office when they vote against the majority. When the time comes to vote them out of office, we keep forgetting why we disliked them and reelect the same ones...

We can change things with our vote...use it

For your information, officers are reprimanded for speeding if they get caught by one of the cameras. Even in their cruisers.