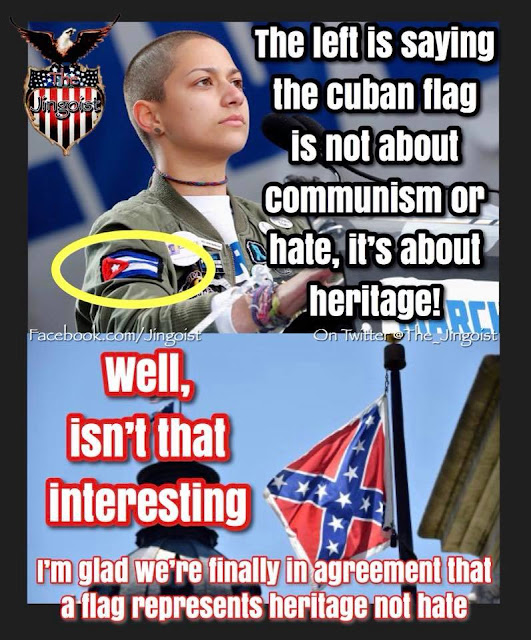 Her heritage is Cuban...

Right one is a country and culture, the other is the symbol of the army defeated in the civil war.

I love the Confederate flag. It let's me identify inbred idiots from afar

This is the same little twerp that admitted to bullying the shooter and said she was justified in doing so.

My heritage is Southern but I cannot fly the Naval Jack without being called a racist but blacks can fly the African flag along with Mexican flag and all others but that is called heritage. They don't even claim to be an American they are(something) - American. talk about discriminatory

Some moronic statements on this thread.

9:42-I find your comments that of an inbred idiot. Plus, you are a bigot.

9:42-It is not just a symbol of a defeat. It is a symbol of heritage and honor to many families.

10:05- Peanut butter sandwiches are better with jelly. That's about how much logic your statement is when commenting against this thread. Your argument is the one that makes no sense. How is the Cuban flag more acceptable to brandish in America?

But but but muh guns!

It really is just a participation trophy for conservatives isn't it


There were quite a few different Confederate unit and battle flags; people are welcome to their opinions. After the Civil War our country gradually reunited, and we all admit there were shortcomings, imperfections and abuses along the way from then until now.

But for the girl in the picture to be wearing the Communist Cuban national flag on her sleeve sends a much different message. Cuba is a family run Communist dictatorship since the late 1950s, and the Miami/South Florida area is now home to a great many Cuban refugees. Many lost relatives to Castro's regime and secret police or while at sea seeking refuge in the US.

Good thing she resides in the US where we tolerate this, and where brave men and women have died protecting the 1st and 2nd Amendments, and all the rest of the Constitution, so she can run her mouth. She couldn't pull the same stunt in Castro's Cuba, and she is oblivious to the irony. She's a total tool.