I've Said It All Along, ALL LIVES MATTER! 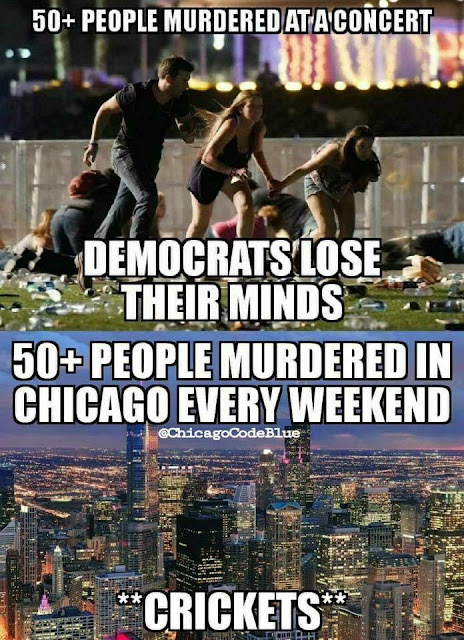 50+ people are not killed on a typical Chicago weekend.

Where is the outrage!

58 were killed in September and 11 more this week. 543 to date. No Democratic outrage because Democrats have no problem with black deaths. Think I'm wrong? It was a Democrat who created the American eugenics program, Planned Parenthood, which murders proportionately more black Americans than any other cause.

12:05 PM,
Where is the OUTRAGE. It is so funny that you ask. The outrage is within white privilege. Yes, Black on Black crime is bad. Drugs sell and distribution in the Black community is bad. Petty crime is abundance in the Black community. But, privilege white rage owns high power military type weapons, bomb making materials, fear and hate that kills large groups of people and children in peaceful surrounding environments. You guys need to really look at your history of violence in this country.

Wow, 6:40, take a breath! White priviledge is using military grade weapons and bomb making materials to kill the Chicago and Baltimore blacks? Where is THAT headline???? When does THAT story break?

We all missed that story. Please direct us to the story so we can all read up on it!

How about the violence in the abortion centers? Democrats not only complicit they are acting members!

A gunman in Las Vegas opened fired and killed at least 58 people in a heinous act Sunday night that has since been described by many in the media as the “deadliest mass shooting” in U.S. history.

Yet to describe it in such terms is to whitewash history, as it negates more deadly mass shootings and race riots throughout American history that impacted people of color. The shooting, as horrific as it is, also serves as a useful reminder to those in the media to be watchful of the language used to report and share a story.

Many learned this lesson last year during the horrific massacre at Pulse nightclub in Florida where another lone gunman, Omar Matteen, opened fire killing 49 people, mostly LGBT Latinos, and wounding nearly 60 others.
At the time, the Pulse massacre was also described by some in the media as the “deadliest shooting in American history.” Some platforms simply called out this inaccuracy, while others used it to provide a broader discussion of America’s long history of mass gun violence.

“If the decision is made to add a superlative, [the Pulse] shooting would count as the deadliest shooting in recent or modern history,” it continued. The statement cited at least two separate occasions in American history where mass shootings resulted in higher death tolls than that of the Pulse massacre. For one, the East St. Louis Massacre in 1917 led to the killings of more than 100 black Americans who were beaten, shot and lynched. It is estimated that another 60 to 100 black Americans were killed in a similar act of mass racial violence in Colfax, Louisiana in 1873.

Between 1864 and 1890, three other mass shootings ― the Sand Creek, Clear Lake and Wounded Knee massacres ― cost the lives of hundreds of Native Americans and pioneer settlers by U.S. Army men across the Midwest. The Tulsa race riots occurred when a mob of white rioters ransacked a segregated area known as “Black Wall Street” in a shooting and looting rampage that killed close to 300 people.

How about the Slavery, Civil War, treatment of people period during the
Civil Right Movement etc, etc. White privilege rage, fear and hatred is destructive. Remember the Japanese encampment right here in the U. S.

There will NEVER be peace in this country until white Americans understand completely their propensity towards violence enacted in the past, in todays society and conflicts created throughout the world. We are a nation full of violent and hateful people. The Sandy Hook incident (the killing of all those children) should have awaken the conscious of American people. As you can see, it did not. Therefore, don't be scared when North Korea, Iran, Russia or other I hate America countries make an attempt to destroy our nation. This is the direction this nation is moving. And if we continue down this road of destruction, they will see this great country of these United States with all their riches and military power, made desolate in one hour. This is what white privilege rage is doing to this country. Please wake up.