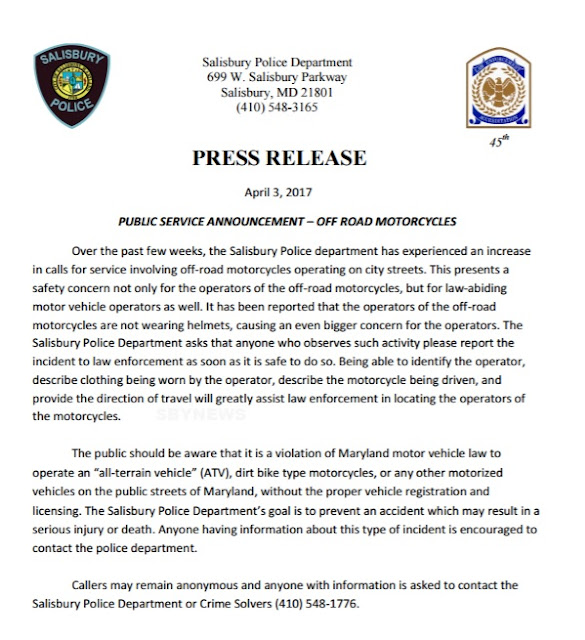 Question - Dude riding bike gets to his destination (home) and goes in the house, I call it in. Then what. I am told, by the PD that unless they actually see it, there is nothing they can do. And I am not testifying against this trash to be retaliated against in the future.

Maybe PD can clarify that point of this. Explain to me why I am putting my self at risk.

LOL THE IDIOT chief wont alliw her officers to do there job to impound and arrest these Thugs and she is a total Embaressment to SPD.

Last few months? What planet is SPD on? Almost 2 years

Last week I called it in. Saw 3 black teenagers riding 3 off road dirt bikes down Isabella St. coming from the Railroad tracks headed in the direction of Rt.13 just before the 4 way stop sign at Division.

They were popping wheelies all during a time when school buses were dropping kids off in the area.

I think the Sheriff's office or SPD should purchase some dual sport bikes to chase these kids down. The dirt bikes can get away because the cars can't go in the same places when they run. They would be in for a big surprise if SPD rolled up on some Suzuki DR 650's.

Just hang out on Isabella St. and Rt 13, you'll see them traveling back and forth. They cut through traffic at red lights. Too bad they all look alike, makes it difficult to give a description.

I've called several times on these kids and yet it's 20-30 minutes before we ever see an officer in the area if they ever show up. Given descriptions and even direction to where they went as this is almost a daily occurrence and still nothing!!!

No need to call in anything in Salisbury and the thugs know it. You call something in and like 1:17 said, if they didn't see it, they can't do anything. What kind of help is that? Might as well look the other way and pretend you saw nothing.

When the criminal element knows that the local LEO's won't do a damn thing - they run the asylum. Been that way for years and it will only get worse unless there is a crackdown.

I love when they slam into a ROCK like the idiot did 3 yrs ago lol.

Where are ALL THE MD STATE POLICE ? another bunch of chicken S..Ts

All leave them alone they are practicing to be taliban.lol

Get some good ponzettis pizza to lure them in.

This press release is a jewel. I'm pretty sure we minions have a idea it is against the law to take over the skreet with unregistered dirt bikes. Though they are going without helmets while riding on the rear axle, I doubt there would be any harm done to the black skulls bouncing on the blacktop. I say black skulls because they came pass my residence yesterday, approximately six, with several reaching the skies with the front. This while passing and traveling at a speed greater than reasonable. What good would the description do for the law? Give a location and direction and when the patrol officer see's them, they should know it. Even though the law would likely refrain from chasing them, it would be money spent wisely to have crouch rocket bikes operated by plain clothes officers, than a dressed touring bike for parades. Perhaps they do, I don't know.

got a junker open door policy what a take up

This is hilarious to watch. I was at ace hardware few days ago and guy rode through parking lot of wine bar turned around sat in the middle of parking lot while two officers sat at stop sign waiting. He rode off pulling right up to doors of both cars and took off. They chased him all through Princeton neighborhood and then back up eastern shore drive. He literally was playing games with them and they couldn't and didn't do a few thing

Its time for some Charles Bronson action but we all know good old liberal Jake day wouldn't allow any of Salisbury residents to stand up for themselves. Their waiting to sue the city when they try to engage on of these clowns and they get hurt

There are military snowflake cupcakes around us and ole jake is the main tool in dabury.

8:28
Hang in there. Remember they are going to get their world rocked. Weren't but two bikers around here that would qualify to catch this turds. Sadly they are in Biker Heaven, Benny B and Tony S. R.I.P.