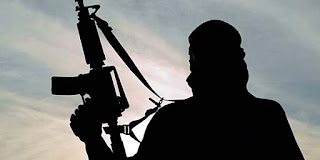 A Muslim man entered a private gathering of Christians in a hotel ballroom in South Dakota, started cursing and livestreaming video on Facebook of the event and then, after he was ushered out, displayed multiple firearms and issued statements the speakers say were a direct threat to their safety.

The man, wearing a t-shirt that said, “I’m American, I’m a Muslim, I open carry, I conceal carry, and I’m dangerous only if you’re stupid,” was approached by a security guard and told to leave.

Once back in his car, he brandished an arsenal of weapons, including two military-style rifles with loaded magazines and three handguns, and made several threats of “Be scared, be F—ing scared. Be terrified.” Again, it was all livestreamed on Facebook while parked in the conference center parking lot.

To the surprise of the conference organizers in Sioux Falls, after reviewing the videos, police chose not to charge the man with any crime. The state’s attorney says he’s still investigating but didn’t see anything criminal in nature on the videos.

So having loaded weapons without permits is ok. Wow. Hopefully this jihad gets started soon. So we can send some of these demons to hell with allah! Lets roll

Bring it on morons!!! You will won't last month in this country.

The reason! why nothing is done is because satan is alive in their deceived supporters. Islam is not a religion of peace its a satanic cult.Please educate yourself. You must understand your enemy.

To be initiated into the Shrine, to become a Shriner, as part of their blood oath at the altar of initiation, the Shriner must bow down, with his hands tied behind his back, and swear an oath in the name of "Allah, the God of our Fathers!" Now, it is important to remember that the Islamic god, Allah, is in no way connected to the true God of the Bible. Allah is a pagan, Arabic deity. Allah is a false god. Allah is not the God of Judaism and Christianity; and Allah's prophet, Mohammed, was a false prophet who has led millions of people astray! As if that wasn't bad enough, most Shriners have no idea about the symbolism portrayed on the red fez hats they proudly wear. Each red Fez worn by the Shriners has on the front an Islamic sword and crescent moon prominently displayed and encrusted with jewels. The crescent moon is the most common Islamic symbol. In fact, it is found on the top of every Muslim mosque around the world and on the flags of many Islamic nations. The crescent moon represents the god of Islam, Allah, who was the pagan moon deity of Mohammed's tribe, the Quraysh of Arabia. When Mohammed conquered Mecca in Saudi Arabia by force in 630 A.D. he destroyed all of the 360 pagan tribal deities in the Kaaba and set up his tribal deity, the moon god, Allah, as the chief deity of Arabia. Later, when he tried to convince the Jews and Christians of Arabia to worship Allah, they refused, knowing the true identity of Allah, and Mohammed then began his bloody conquest of the Arabian peninsula, slaughtering thousands by the sword, the very same Islamic sword celebrated on the Shriner's red fez!

SD is an open carry and shall issue state. Even muslims can get a CCW permit if not otherwise prohibited. Did you really think only white christians are issued permits?

Dont see white armed Christians hanging out at mosques or gathering and threating Muslims! Maybe they should start!

He won't have any guns soon. They will pull is license and ATF will be on his door step after he gets "unmasked" by NSA. He is a dumbass.

And no one freaked because everyone was packing. Wake up people this is sheer propoganda at its finest. Grandma in church would have put a hot one in him quick in SD if he came in meaning business.

9:00
You must teach at a liberal university. That is the dumbest propaganda I have read on here in all these years. Lol

Sounds like terroristic threatening to me. Is that not against the law in S.D?
Not giving up your 2nd amendment right to bear arms shouldn't preclude your 1st amendment right to freely assemble!
S.O.B is lucky no one else carrying felt threatened enough to take him out.

Ha ha ha he don't know crazy until he comes to the Eastern Shore!!! You don't believe me just look at commentary on this blog.....LOL

11:27 sorry i don't. Whats a matter truth hurt your feelings. Must have Hit close to home.

Good thing it was in Sioux Falls (for him)...
The police in that town show up, see a bunch of loaded guns and a man acting wild and threatening people and decide it is not that big of a deal. Everyone goes home and no one gets shot.
Contrast that with the armed agents of the East Coast. They just spent millions of dollars and thousands of man-hours to catch some speeders and some seat belt violators, any of which would have been shot to death for not "complying" in a multi-state effort to teach the citizens who really is the boss.
Keep cheering.