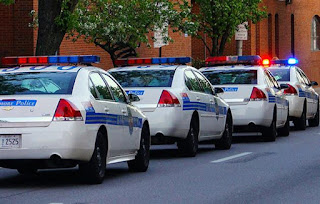 The seven city cops charged in that federal corruption case may be working out deals with prosecutors.

A letter was sent to the federal judge from the U.S. Attorney's Office this week giving an update.

The office said in the letter that it has been working with defense attorneys on possible plea deals. And that has apparently been in the works about four days after the seven were arrested.

Stop making "plea deals" with corrupt cops and politicians.
THEY should he held to a much higher standard, as much more is expected of them and much more power is given to them.
If you KNOW, for sure and with certainty, that you WILL go to prison for taking a bribe, or transporting/guarding drug shipments, or shaking down a drug dealer, or whatever, it's a lot less likely those events will take place. When they do, it's PRISON. No deal. No parole. No mercy. No exceptions.
It's sorta like the old saying, "for those who are given much, much is expected".
Integrity. You either have it or you don't.
Punish those who in public service who don't have any.

It's sickening to be an observer and to watch how justice is handed out the an elite few.
This country, sinks deeper and deeper into a cesspool by the minute.

Why would you say that? Do you disagree with what he says? Do you know him personally and have some inside information on him? Or, are you just like so many others you attack others for no apparent reasons other than you don't like what they say, their spelling or some other unimportant 'reason'?

Plea deals are made millions of times a week in MD. Not a big deal.

They make plea deals to lighten their court load. They save time by not having to conduct a trial and they get a guaranteed conviction. P.S. they even save taxpayers monies by obtaining plea deals.

Officers are no better than anyone else. They should go to prison and be right in the general population like everyone else is. They know better. They just expect to just get a slap on the wrist and fired. They are lower than a regular criminal. You cannot get any lower than a bad cop.