A Viewer Writes: After 25 years, I finally cancelled my Daily Times subscription 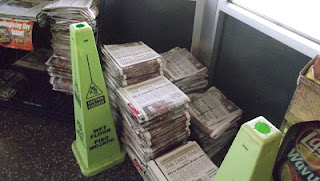 After the incessant barrage of left-winged propaganda, I cancelled my subscription to the Daily ‘Waste of’ Times. Like watching my wife, angrily troll through liberal Facebook posts, it made me angry and depressed to read that crap each morning. The nail in the coffin was when they posted the rebuke of on Trump in a full page reprint/ regurgitation from USA today/Gannett, their extreme left-leaning manufacturer of liberal Kool-Aid.

When I called them to cancel, they asked why. Not a good time to ask that question, but I was direct: “I am sick and tire of companies like the Times telling me how to think. Furthermore, I’m surprised that, as a business, you continue to make a product that insults a large majority of your customers. Why would any smart businessman do that? Please pass that along to the editor. If I did that, I would be out of business”

So, it got me to thinking. Since liberals change policy by boycotting businesses – and entire states (NCAA and North Carolina) when they don’t like something- why don’t we start a movement to boycott the Times until they start reporting in a fair and balances way. Not ‘right’ – not ‘left’ -but fair. I don’t want to see a Bill O’Reilly as much as I don’t want to see a Rachel Maddow lean one way or the other. They both are too extreme. And when an opinion is expressed, label it as such. Don’t hide it through a subliminal liberal narrative hidden within the story. How about simply reporting the story without any bias. I know that’s hard, since all of your professors told you how to right that way. And how about NOT omitting stories to achieve your left leaning agenda. What a fresh and novel idea.

It is obvious that a majority of local citizens do not agree with your views, so please stop trying to convince us otherwise.

So, we the right-minded, deplorable people of the Eastern Shore hereby declare full and complete boycott of your newspaper until you admit your bias, apologize for it and commit to fair and balanced reporting. I really miss the paper, actually- my dog does more, as she wonders around at the end of my driveway looking for something to bring in and, since its woodstove season, I need something else to light the fire.

I agree with the boycotting and I do it all the time. But do not waste your time on the media because they will never change.

Now would not be a good time to buy Gannett stock.

I think it's mostly the older folks who still still read the paper, mostly out of habit.
I think the subscriber numbers are dropping as the older folks are losing mental capacity to read the paper and eventually passing on.
The DT will eventually disappear. Probably pretty soon.
A boycott might hasten the process, but they're on the way out, regardless.

My one question: What took you so long?

There has never been more liberal and idiotic opinions written by George Mason and Geoff Smoot.You will never get a honest and sensible word written in non democratic ink.

As Joe mentioned above concerning refusing to publish stories such as the mall robbery and other relevant crimes/incidents is the same as lying in a article. Withholding information is a purposeful decision to deceive and sway the public for the benefit of the publisher.

As a once-proud alumnus of SSC (now SU) in 1979, I did my share financially for them for years, until the policies there became so liberal that my conscience would not allow it. No Target, no Ben and Jerry's, no Disney, no Pepsi...been reading the WaPo daily since I was a child but cancelled my online subscription two days ago after reading all the anti-Trump bile. Probably stopped buying the Daily Times in the early 80's.

11:11 Sports, obits and local legislative news... or was it the daily police beat???

Just because they don't agree with you, you say that their opinions are liberal and idiotic. George Mason and Geoff Smoot have opinions, and a right to their opinions. You name names, but why not mention people like Ernest Cornbrooks or Carl Crumbacker and others. People probably think their opinions are idiotic.

Reporting crime is bad for business.

did this last year along with many others. they are NO longer relevant...

1:26 We're talking about news, not OpEd. And, yes, the Editor is a Kool-Aid drinker, too. News should be unbiased so we can form our own opinions. Opinions should be labeled as such, and/or be in the OpEd section. Look at todays paper: full page article on Megan Kelly on how she was offended by Trump. Really? Does that 'opinion' disguised as news warrant a full page smear? Everything that paper does is slanted left, even local articles.
JOURNALISTS HAVE LOST ALL OF THIER INTEGRITY!!!

If it wasn't for my wife, I would have cancelled it 25 years ago. The only thing it's good for is starting my fireplace wood.

I didn't wait as long as you did to cancel my subscription but cancel I did and I haven't regretted doing it.

we had it because of my husband. when he died, i cancelled it the next business day. not sorry, either.