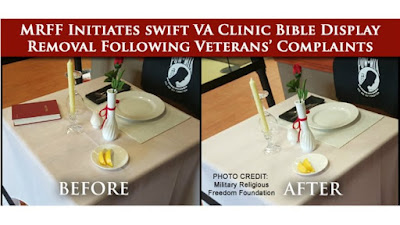 A Bible and Bible verse were removed from a POW/MIA display inside an Ohio Veteran’s Administration clinic after the notorious Military Religious Freedom Foundation complained.

The religious artifacts were part of a “Missing Man Table” recently erected by volunteers at an outpatient clinic in Akron.

MRFF founder Mikey Weinstein alleged the inclusion of the Bible was a violation of the U.S. Constitution. He said he intervened at the request of nearly a dozen, mostly Christian, military veterans who utilize the clinic.

However, clinic administrator Brian Reinhart said to his knowledge no one ever complained.

In other words, Mr. Weinstein’s allegations are a bit dubious.

Nevertheless, Reinhart relented and evicted God’s Word from the display.

To say that Weinstein was giddy over the desecration of such a moving tribute would be an understatement.

How did it actually harm him or hurt him??
"deny me and I will deny you before my Father."
They WILL be sorry......

"How did it actually harm him or hurt him??"
As usual, you're right on target.
He has no 'standing'.

"How did it harm or hurt him?"

Our soldiers fight and die defending all Americans liberties and freedoms, not just Christian Americans.

Having the Bible and a verse on the table misrepresents what our soldiers courageously do for our nation every day.

They don't represent Christian Americans only, they represent Americans.... even those who exercise their Constitutionally guaranteed right to worship as they see fit to, or not to.

It's also ironic to me that you always use some sort of strong arm threat about what will happen if I don't fall in line with your religion. While it is sure to get lots of whooping and high fiving from your camp, it does little to serve your cause. It merely exposes you as the "protection money" extortion racket that it seems to be. I don't believe in your deity, so threats don't really help your cause. May be you should revisit that tactic.

If people 'complained about the Bible and scripture' and it was removed will the put it back if just as many people complain about it being gone?

Exactly, what would they complain about? There is not enough Christian specific iconography and proselytizing on the memorial to understand what the memorials meaning is? That doesn't even make sense.

What if enough people complained that their weren't enough Q'urans or Books of Morman? Would they clutter up the memorial with these to? It just makes no sense.

A quote from a man whose death changed our definition of time itself is a "strong arm threat"?
Man.
You take you offense at Christianity to a new level.
Further, I am a veteran --- a Vietnam-era veteran.
I would not mind if they put a Koran on that table.
And I don't care much for the muslim religion, either.
Unlike YOU, I can ignore things that offend me. I don't feel the need to push faith (or any other ideas, thoughts, or ideals) on anyone. If you don't believe in Christ, that's fine by me, but I also don't think you should be able to force YOUR non-beliefs upon a nation that IS STILL A MAJORITY CHRISTIAN nation.
What is it with atheists??? You people scour the Earth (not exactly, I guess. You'd be KILLED for what you say in many countries) looking for something that MAY have some kind of religious connotation so you can do what?? get in a tizzy over some knife-to-the-heart symbol that almost makes you catch on fire from being "offended"???
Open another court case?
Post a note about how terribly offended you are about the latest affront to your sensibilities?
By the way, did you ever crouch in a foxhole or serve this country, or are you assuming some things on behalf of all the soldiers (at least 7 or 8) who you wish were as "offended" as you?

Every time I think that the PC police have reached the end of their frivolous causes they startle me with yet one more.

Freedom OF Religion, as stated in the Constitution, is NOT the same as freedom FROM religion.

You seem to really be obsessed with trying to redirect the focus of the conversation every time by building this "offended" straw man, and every time I take you to task on it, you obfuscate and move the goal post. Let me once again help you out. This has nothing to do with being offended.

Might equals right is not a valid argument. Just because at this moment in history America is made up of a majority of self identifying Christians does not make it o.k. for them to ratchet their brand of religiosity into everything that is in the public domain.

You didn't address one single point that I posted, didn't try to rebut any of my points, you merely answered with distraction and distortion. Which again, leaves me wondering why?

So I'll try to Nerf this for you. Tell me why the memorial HAS to have your religions iconography on it? How does it enhance the message?

Also tell me, how should I interpret "they WILL be sorry"? Tell me about that, and tell me how it is anything other than a threat? Why am I wrong when I see this and interpret it as a "protection money" extortion scheme?

I'm all ears, and eagerly wait your thoughtful reply.