Look what Liberals are canceling because it's "Racist": Didn't This Just Happen In Salisbury? 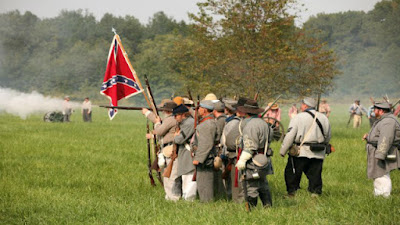 Liberals are acting out again, claiming racism where none exists.
You have to think of the liberal mind as that of an infant’s who needs everything now, and if they don’t get what they want, expect a tantrum.
The difference between a liberal and a baby is that the baby doesn’t know any better. No, wait, I think I might have that backwards.
On one hand, blabbering libs are great, because we’ll never run out of hilarious anecdotes to talk about. On the other hand, sorry you have to deal with this, America.
A Civil War reenactment sounds fun to go to on a Saturday afternoon, but if the Left has their way, the event will be shut down for good.
From Federalist Papers via WCSC:

Boone Hall Plantation has decided to cancel this year’s Living History Weekend out of sensitivity to the shooting massacre of nine worshipers at Emanuel AME in downtown Charleston.
“We decided to show honor and respect to the victims of the recent tragedy and give the community time to heal,” spokesperson Rick Benthall said. “It was a difficult decision as Boone Hall’s association with this event has been long standing, but one we made and think is best on behalf of Boone Hall and the Charleston community at this time.”

Elect Trump and this crap will stop.

Yes it did just happen!

Very sad! Boone Hall Plantation is where the miniseries North and South was filmed. Many super stars such as Patrick Haley, Johnny Cash, Forest Whitaker, Elizabeth Taylor, Gene Kelly, Lesley-Anne Down and and many others both black and white. It is also where the TV series Queen starring Halle Berry and written by Alex Haley was filmed.

This is a sad time in our country because of you liberal POS's and RINO's.

Yeah let's cancel it this year out of sensitivity and then the dumb moron's we fooled will forget about it the following year. Yeah that's the ticket!

You soft hearted dumbasses are owned by the gun controllers and the race baiters.