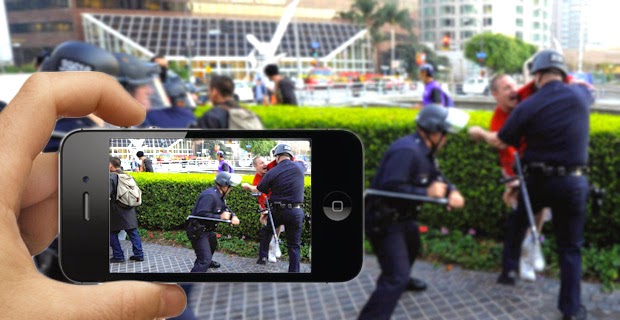 “Photography is a form of power, and people are loath to give up power, including police officers.”

First of all, they shouldn’t ask.

“As a basic principle, we can’t tell you to stop recording,” says Delroy Burton, chairman of D.C.’s metropolitan police union and a 21-year veteran on the force. “If you’re standing across the street videotaping, and I’m in a public place, carrying out my public functions, [then] I’m subject to recording, and there’s nothing legally the police officer can do to stop you from recording.”

“What you don’t have a right to do is interfere,” he says. “Record from a distance, stay out of the scene, and the officer doesn’t have the right to come over and take your camera, confiscate it.”

Officers do have a right to tell you to stop interfering with their work, Burton told me, but they still aren’t allowed to destroy film.

Yet still some officers do. Last week, an amateur video appeared to show a U.S. Marshal confiscating and destroying a woman’s camera as she filmed him.

TWO sets of laws.
One for the masters and one for the serfs.
You and I go to PRISON for crime.
The masters get a promotion, vacation with pay and carte blanche to do whatever they please because they , too, know about the two sets of laws thing.
Wonder why there is swelling resistance to authority?
If people do not see equal justice for all, regardless of position or status, cities burn and governments topple.
That, people, is an historical fact. An inevitability.

It wouldn't work for me, because I can't seem to manage getting my phone out and ready to record before the action is over, but there are apps which will stream your video directly to a server, so even if the police (or anyone else) destroys your camera the video will be preserved.

How are there two sets of laws, mouth? This article goes into detail about how citizens CAN film the police.

Remember this when filming on the boardwalk in OC, performers can't demand a fee from you for taking video or pictures of them. You are allowed to film anything in a public place!

11:38....Should I go slow for you?
Draw some pictures?
That cop TOUCHED that woman in a violent manner, took her personal property and destroyed it.
Did he get arrested? Charged? Jail time? Maybe even a reprimand?
Because someone wears a badge does not exempt them from the law.
there is NO LAW that says a cop can drive 75 because he's late for dinner. Or shoot unarmed people IN THE BACK with no consequences.
But they still do it.
With no consequences.
THERE is your "two sets of laws".
Did I go too fast for you?

S.C. I knew it was you on here. Welcome.

how about "Yes, sir" when asked to stop filming?