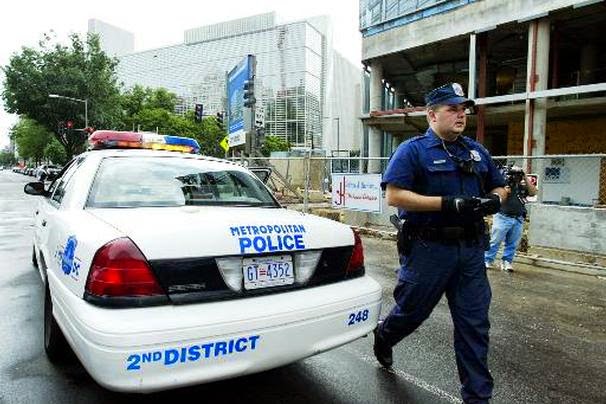 Independent Councilmember David Grosso made his comments Wednesday night at a hearing on the use of stop-and-frisk and other tactics by District of Columbia police.

Grosso said his staff has urged him not to express the opinion, but nonetheless, he said, "I think we ought to get rid of guns in the city and that police shouldn't have guns."

I imagine the criminals would have a field day. Is this guy on crack?!!!

Exactly! Arm them with Boxing gloves. Their going to whip your butt any way.

Why not? DC is a gun free zone. If the criminals don't have guns, why do the kops need them?

Well, seein's that the citizenry isn't allowed to have guns, there's really no need for the police to own guns, either.

That levels the playing field, right?

When public employee make stupid comments, like this, they should be stripped of their position and permanently banned from ALL public sector jobs. This is almost as dumb as that genius CONGRESSMAN who was worried about Guam capsizing due to overpopulation.

"My fear is that the whole island will become so overly populated that it will tip over and capsize," Hank Johnson

armed robbery would be a alltime high. what a idiot

Bingo 10:51 I'd be willing to bet a bushel of #1's that police brutality would drop over night. I bet they would even maybe have to be nicer.

As a former LEO I would love to see other LEOs doing what is right and quit demeaning the job, but with all the illegal guns in the District, this would be craze, stupid for even thinking about it.

I think that is a great idea. Taxpayer monies for police brutality, excessive force, the killing of people's pets, other people using kops guns to commit crimes, etc., all that would practically disappear overnight.

Hire Grasso on the Police Force and send him out on Patrol without a firearm. See how he likes it.
XBow

NO the problem is that cops NEED to be walking the beat again.

I hope this council member dosent get Pistol Whipped.

Law abiding citizens in DC are unarmed. 10:51 thinks the police should be unarmed. What does that leave? The armed criminal - I guess 10:51 believes that the armed criminal complies with gun laws. I say lets do this study and see if the homicide, robbery rate goes up or down. How many police would DC have left after the study and how many intelligent citizens who want to work in DC on the police force will apply. The Federal Government pisses away millions on robot squirrels - Why not this.

Like I sooooo Agree, and all in the White House and surrounding areas should not have guns.....

"Wells said he held the hearing in part because of high-profile incidents including the shooting of an unarmed teenager by police in Ferguson, Missouri."

And this has what to do with Washington D.C.?

Nothing, these idiots are creating problems that don't exist.

I say disarm every cop and lets see how many stay on the force to protect Grasso and Wells. Let's do it. See how long they stay in office.

I notice Wells didn't say which countries have LEO's without guns. Because he doesn't know, just something he heard.

And those intelligent Democrats represent the people. LMFAO.

Ummm, 625pm, I think the original article as posted said "DC" in the headline. Not to go off on a haywire assumption that the story may have been about "Washington, DC", because, as we all know, there sooooo many other "DC's" in the Nation.

Sorry you were confused here.Gosh, so damned sorry. It must suck to be you.

Blogger Jack K Richards said...
As a former LEO I would love to see other LEOs doing what is right and quit demeaning the job, but with all the illegal guns in the District, this would be craze, stupid for even thinking about it.

I hope your grammar use was better when you had to fill out police reports, but maybe it wasn't necessary. All of you have the same low I.Q. so it was probably understood very well.


And this has what to do with Washington D.C.?

Nothing, these idiots are creating problems that don't exist.

You are correct, since D.C. does NOT have armed goons with badges.

The only way this could ever work is for the law abiding citizens to be allowed to arm and defend themselves. THAT IS THE ONLY WAY!