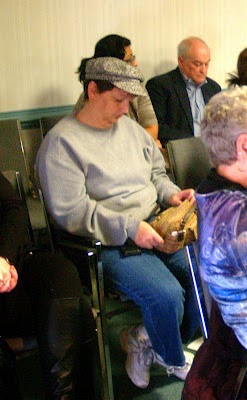 Is there a ONE of you out there that would prescribe ONE HUNDRED AND SIXTY EIGHT METHADONE PILLS to someone experiencing migraine headaches?

Remember Folks, being a narcotic, they can only prescribe each prescription for 30 days. That's more than FIVE pills per day.

"Nah, he really wouldn't buy me that fake COACH purse, would he???" lol

hanks Mr. Albero, it is a dirty job but someone has to do it.
( He will stand up for what he believes is right, that takes courage,)
Corruption in public office deserves attention, it is a matter of morals, what the commuity expects of its public officials

We are "afraid" to tell the truth, to meet dishonesty face to face. Anyone with courage in Salisbury?

The voters have the right and need to know, Ms. Mitchel has a closet full of bad bad stuff, Ms. Shields too (I am told) so lets get to it, honor and integrity are important in public office. We don't see much of it from Ms Mitchel and her secrets...or Ms Shields. Publishing the story is important too.thanks to the Times


Let the Sunshine in....people out there know the facts. lets get to them....

This is a question that deserves to be asked. Wondering if anyone has the 'nads to answer.

The label reads "Take four tablets (every x) hours". It's not a "take as needed" prescription, but an around the clock specified dose.
This patient would be taking this medication at least twice daily (take every 12 hours) in the amount of four tablets each time, so at least eight tablets daily.
If the medication was to be taken every eight hours, it would mean 12 tablets daily, and if every six hours, 16 tablets daily.

Would be interesting to know what doctor actually prescribed the pills.

most doctors would never prescribe that many pills for a trial basis. first would come a small amount and see if that is what it takes to relieve symtoms

11:40 is completely correct. with a complex medication like methadone, you don't write a script for that amount. of course unless she's on disability. so it costs a dollar or 2, for 5 pills, or 168.
if she stopped taking them, what happened to the rest also? the bottle was in her son's car? police evidence?
a tangled web she's weaved.

Who is the dude with the had. Is that one of Jim's boy friends?

PLEASE! I would't go to the dump dressed like that! Please what was the meeting? and was she representing the city? Did she drive the citys car there?

Just spin the bottle around and it'll say who prescribed it,duh.