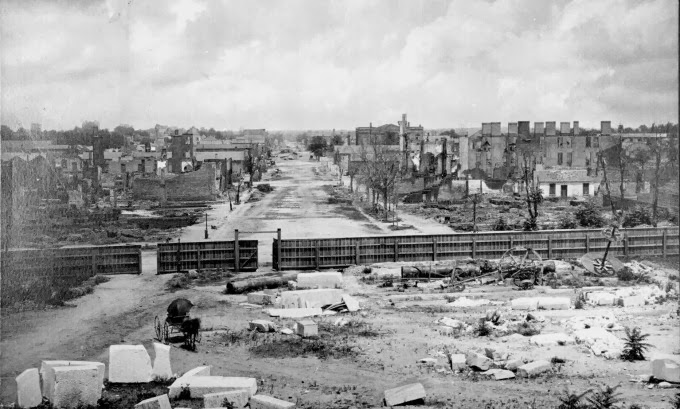 On this day in 1865, Union forces under the command of major general William Tecumseh Sherman captured the city of Columbia, S.C. – and burned a sizable portion of it to the ground.

In his 1999 book Lies Across America, author James W. Loewen disputes this version of history – the one that’s still plastered on monuments all over the Southern city. Citing research by historians Marion Lucas and James Rhoads, Loewen concludes that the main fire which destroyed roughly a third of the city was accidental – the result of wind rekindling cotton fires set previously by retreating Confederate troops.

In fact according to Loewen’s account, union troops actually helped to contain the conflagration.

To the victor go the spoils, and the writing of the history of the conflict. Those dam Yankees have rewritten the history of this entire war. Everything taught today about the "War of Northern Aggression", or Civil War, as they call it. I don't see that the killing of thousands was anything but "Civil", is a lie.
According to the revisionist, the entire war was to free the slaves! Yup, 600,000 plus men died to keep or free slaves!
Everything else was hunky dorie with the American people, everyone was happy but mad about slaves, so they went to war.