The Race For Salisbury's Next Mayor Is Decided 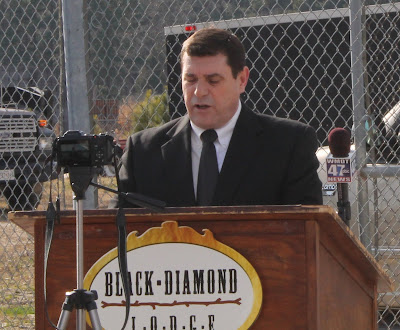 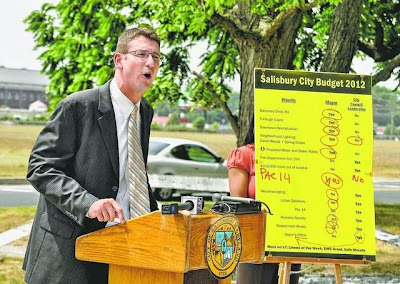 Mayor Jim Ireton and Joe Albero will face off without a primary. While there have been many suggestions and even threats that others will be joining the race for Mayor, that ended just moments ago at 4:30 PM as no one else put their hat into the ring.

Congrats!
I hope you don't debate him. Let him marinate in his own misdeeds without an opportunity to whine in public.

"Out with the old & in with the new" in order to move Salisbury in a forward direction instead of backwards, so failure is NOT an option Joe!

Joe, I wish you the best in the Mayor's Race. I really, sincerely hope that you win. You are a true leader and Salisbury would be truly blessed to have you at the helm. Salisbury could be a wonderful city again and I hope that you are the one to lead us in that direction. Good luck...Beth

Perfect contrast of photos, would make a good brochure:

Actually, since there are only 2 running there will not be a Mayoral primary, just a general election.

I think they (those who want to control Salisbury again) want Campbell's seat more than that of the Mayor. Who else filed to run for that one?

5:23 - That's funny! Not sure if you realize it, but you pretty much said that Ireton will be marinating in his own "whine."

That's what this says

6:05
I don't think she is up for reelection for another 2 years. Don't quote me but I think that is what I remember.

Campbell is definately up and is running for her seat again. I overheard the campaign cronies of one of her opponents in a conversation that suggests thay will resort to every dirty trick in the book again to try and smear her and cause her to lose.

Opps sorry it is Campbell that is running. Cohen is the one that has to wait 2 years.

I like that WMDT has a mic there but WBOC is no where to be found! Amazing!!!

7:19
They were there. I think WBOC forgot their mic stand that day. They had to lay it on the podium.

Do not let Debbie Campbell lose. Ireton's cronies are behind Jacob Day. Louise Smith's crowd is behind Jack Heath.

Ireton will stop at nothing to win again. Remember that.

Heard Cynthia Polk has joined the Shanie Shields - April Jackson face off. She lost by one vote, no thanks to Ireton who sold her out to "Sister Shanie." Remember that.

Going to be one sorry ugly scene in Salisbury.

You are an unqualified asshole. You wont win. There is more to Salisbury than the downtown. Cant wait till you get your signs out....we have big plans for them.

Mud throwing is on the agenda with the prospect of throwing Debbie Campbell out and making ireton and 2 win loser. We need to rise above the media and asked then educate others to the truth to keep the city moving forward or in the economic times atleast balanced. Stay honest and clean Joe and Debbie you won't lose

Have you read Jim's campaign site?! Opened substations? They are all closed! Added bike patrols? When is the last time you saw a cop on a bike other than downtown! Cleaned up the river? How much raw sewage was dumped into the Wicomico during his term! He did NOTHING!

I would not care if Jacob Day was the Pope. If he is Ireton's man, I will never vote for him, not this time, not ever. A man of honor would not associate himself with a man who used his friends and lied to the public just to get himself elected. Those are my opinions and I am entitled to them.

Hear the Fatboy is posting Ireton is running unopposed but he needs donations to be sure. Lol

And, let's not forget Louweasel. Debbie Campbell and Terry Cohen have been a breath of fresh air. They have always put the city first. Campbell stood courageously as the lone vote trying to protect the interests of the city and us taxpayers against Dunn and his cronies. Then, she and Terry. We can count on Campbell to save us about $1 million every year in mistakes she finds that were made by the administration. Ireton doesn't want anyone to know that the River's Edge idea for artisans was Campbell's. She also spearheaded the successful effort to get police pay straightened out. She has my vote. It would be a sad day for Salisbury to lose representation like hers.

With just two mayoral candidates, why is there a "primary" election?

11:30, there will be a primary for the district 1 seat Shanie Shields is in and for the district 2 seat Debbie Campbell is in. There are three candidates for each of those. The mayor's race won't be on that ballot because there are only two candidates.

"The Race For Salisbury's Next Mayor Is Decided"

Don't count your chickens quite yet as it ain't over 'till the fat lady sings.

of course it's unopposed. Ireton will win by double digits.

Joe has a lot of website followers, but thinking that he has a chance against the incumbant is insane.

Debbie Campbell will get the same overwhelming votes she got in her last election, she hasn't changed her tune one ioda. It's Ireton who has shed his snake skin. Ireton is doomed. Keep focusing on issues Joe and you got this hands down.

9:04 - Ireton is, and never was, worthy of being Salisbury's mayor and your preposterous presumption that he "will win by double digits" is your own selfish ridiculous opinion and not the consensus of the majority Salisbury's residents.

Joe, I saw all your yard signs in Debbie Campbell's yard yesterday! It's so great to see that you and Mrs. Campbell are on the same page in this election!

Joe, I saw all your yard signs in Debbie Campbell's yard yesterday! It's so great to see that you and Mrs. Campbell are on the same page in this election!

Well that is just great! Who says Joe has no support?

Anon 8:07,
You are more than welcome to "TRY" to do something with the yard signs, but remember they have not banned the assault weapons yet. Bring it on! By the way, you are such the big scary person hiding behind the anonymous name.

Watch what happens to the mayors signs.

This is my first time commenting on a blog or for that matter on the Internet itself. I don't have Facebook or a Twitter account. I have read and listened to many people expressing their opinions and I am so disappointed. I must respond! Do you not realize how fragile Salisbury is as a community? My hometown, Salisbury, where my family has lived for generations has become a cesspool of violence and ugliness. What happened? When are we as a people going to stop the slander, the racial tensions, the homophobia, the gang violence, the addiction, gun violence, rape, schools that are below national standards, crime, below average health care and many more issues that are prevalent in our town???? These are the most important issues that face our Salisbury. These are what candidates should be emphasizing. What ideas do you have, Mr candidates, on how to make Salisbury a strong community. This is what I want to know and many many good people of Salisbury, also, want to know. We need a Mayor who will bring us out of chaos. Working on all these issues together. Someone who will inspire us to like one another again because despite what I have read about others, I strongly believe there are tremendously good people that live in our Salisbury and want and are willing to Work together to bring peace to this community. It only takes one person to make a difference. To inspire and lift up the spirits of the down trodden. As I see it, this town needs everyone including the Professionals, students, homeless, gang members, addicts, extremely poor, extremely rich, gay, straight, bisexual, mentally ill, all ethinic groups, business owners, politicians, senior citizens, illegal aliens, etc to help each other with their trials and tribulations in life. Salisbury is not a small town anymore, it is a city with diversity. Something I longed for as a child, diversity! We need a Mayor who is up for the challenge! It can be done, New York did it and so can Salisbury. Mr candidates, I beg of you, change your approach. Inspire, reflect, and educate yourselves. Salisbury needs all it's people to create a thriving, happy, peaceful city. I believe through proper leadership and uplifting guidance, Salisbury can change it's statistics and find it's destination on the map again!!!!