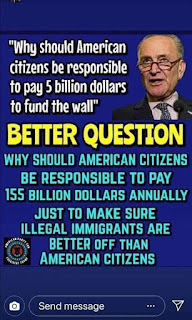 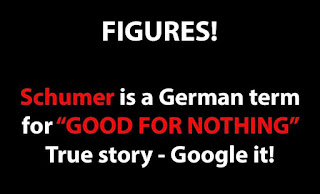 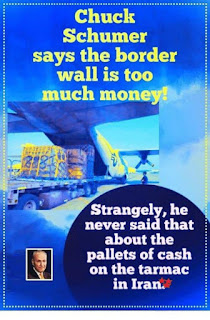 Love the morning funnies; they ring so true.

8:28- proves us wrong. You see, we give actual facts and numbers. Liberals spew out lies and accusations with never any facts. No a single one. You are my case in point.

8:52 where did the number $155 billion come from? That is what they are referring to. Ironically, you are your own case and point.

852 WRONG WRONG WRONG. The list of totally bogus "facts" spewed by Trump and associates is longer than a CVS receipt. This is easily verifiable if you would get your head out the sand. Case in point, the $155 Billion figure. I guarantee you can't show me a single peer reviewed objective analysis to back that number.

8:28 Show some proof you liberal snake

@9:38-116 Billion spent last year, on track to be much higher this year, estimated 155 billion; Watchdog.org
That was easy. What else you trolls got?

8:28- Your party's own AOC stated conservatives are too into providing factual numbers than recognizing the "morality" of her false figures. You all are huffing glue or something. How much dumber can your statements get?

Thank you 1023, I knew this would give rise to the teachable moment I was waiting for. Pssst, a claim from a website supported by a think tank (Franklin Center) is NOT objective peer-reviewed analysis. Its just a claim from a think tank. Anyone can write up whatever "analysis" they come up with. The whole idea of peer reviewed process is to insure you have documented how you perform the analysis and the experts have verified that you have either done your homework correctly or not. Without this, any wahoo can throw out any claim they want. How about this.....sit this debate out and let the real experts examine the numbers. You guys' lack of knowledge is just downright dangerous for the country.

11:42 You've yet to school me, Troll. If fact, anyone can claim someone's wrong, and I'm using your tact here, but when it comes to backing it up, they got nothing. Yes, some may be able to wright a complete sentence, but beyond that, well here you are. Your here bright and early, on a site you obviously disdain, just to bitch. That's how you spend your day. I'm not sitting this debate out, because there is none. You don't win a debate by calling every one else wrong, and nothing else. I think we are fixing our country, as best we can despite people like you. So once again, you lose. You got to be getting use to that by now. I see TDS all over your comments. It's pathetic.

*sigh* unfortunately what this world has come to is that any bozo can make a claim and folks like you will soak it up as fact. Then when presented with information that should show you the value of doing more homework and thinking critically you put your head in the sand. Thats cool. Thats your choice. Just like a dude who decides to wear a skirt and call himself Susan. But in reality just because you choose to believe nonsense, remember that this does not mean your statement is true. Just like dude in a dress is still a dude.

Sorry dude but I dont subscrive to a party. What folks like you who are so drunk on kool aid dont get; sticking to the facts especially when those facts run counter to a preconcieved narrative means you are awake, not a simple sheep in the herd. What you dont fet: it is YOU guys who are putting out false numbers. It is up to YOU to support those numbers. Which you cant. Because you choose to soak up any and all claims that happen to stoke your partisan views. This is what is driving our country into the ground and it is beimg perpetrated on both sides of the aisle.

11:42 we've sat out long enough YOU demoRats are the most disgusting bunch of people that ever lived. YOUR lies dont ever come close to a dollar sign. FAKE PEOPLE teach me something real you cant because you dont know anything real

2:47- If you disagree, state your facts. Why is that so hard for the left to do? THEY NEVER WILL! BTW, it is your party stating we have 12 years left on Earth. Where's the facts! We constantly prove the left as liars, and you just come back with more obvious lies, like we're racist, or foreigners are bad, or we all want to own machine guns. Just stop it already! You have no other political thought other than if Trump supports it, it's wrong. Prove him or us wrong! By now, at least one of you should have countered with facts for this thread, but that is not how you guys go about it. Because you can't! For just once. Prove us wrong! Not one trolling post has so far! I don't want to hear my head is in the sand, my president is a demon, etc., blah, blah, blah. You all need new material, it's tired and after over 2 years, it only makes you look like the real idiots. Just in case you thought 50's era snark can win a political "debate", as some other idiot on this thread thought this was. Well, as a captain of my high school debate team, I can tell you, there was no debate at all. Nothing but a tantrum from your side, because you got owned. You can't put an exact figure on the yearly cost of illegals, but that estimate is pretty close, according to my research. Do you know what research is? I doubt it. PROVE US WRONG!

2:47- Actually if you disagree with the numbers it is up to you to provide evidence that those figures are made up. However, you can't because that would mean you'd have to stop trolling for a minute. It seems conservatives have no problems proving liberals wrong, but you guys seem to have issues with our every statement, and want to argue the morality of facts. Facts don't care about your feelings!

520 WRONG again dude. Lets try this. Your boss claims you are stealing company property and you are going to get fired. The first thing you ask is "where is the evidence?" Same works here buddy. I'm not the one who decided to make the claim of "$155 billion". It is you guys spreading that nonsense. So it is clearly up to you to back that claim with some real evidence/analysis. Simply saying "watchdog.org" wrote it is not doing your homework or providing evidence. Whats funny, spending just a small amount of time factchecking that claim would easily show you why the claim is quite dubious. The information is so obvious, that the fact you don't know it is more of a reflection of laziness and willingness to accept any claim that strokes your ideology. That is the issue (on both sides). Folks like me get really tired of trying to usher you towards information that is readily available at your finger tips. You ask for facts/data, but you clearly show an unwillingness to absorb new information. You are allergic to it. Else, you would have long ago looked into how that "stat" was developed.