This Guy Can't Be Serious!!! 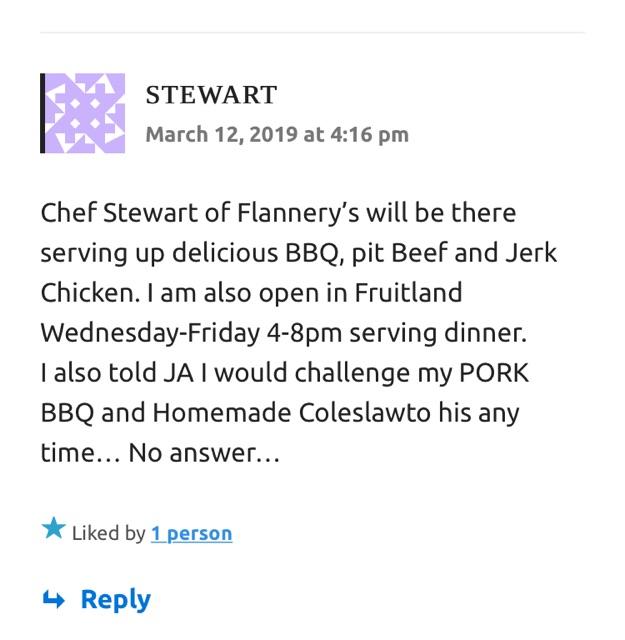 It seems that Stewart from Flannery's has a bug up his A$$ for me and my new restaurant in Ocean City. Well, there's a damn good reason he's stuck in the boonies in a trailer in Riverside Drive in Salisbury/Fruitland.

As many of you have tried, his food absolutely sucks and as someone told me after reading the above post, there's a damn good reason why he's never progressed from a trailer.

My pork bbq is incredible and will certainly blow his away, period. ANYONE, (in which this Idiot has not) who has tried my pork bbq will confirm, it's the best they've ever had, hands down. So this jackass who has never even tried my bbq and is all the way in Salisbury wants to try to claim his is better, I'd say he's obviously scared to death that a blogger has kicked his A$$ and the mass majority are calling him on on his BS because they love my pork.

Just because you CLAIM to use the word Chef in front of your name does NOT mean your any better. Minnesota Fats never played a professional game of pool in his life and he could beat the crap out of most, (if not all) professional players.

If you want real pulled pork bbq, come to a place that has a $30,000.00 smoker, (something even after all these years Stewart doesn't have) and enjoy from a true master of passionate cooking. On top of that, come see the volume of food you get from my restaurant verses trailer trash food from the boonies of Salisbury. No beans and rice will be added at my plates to fill you up and enjoy the most tender pulled pork you can chew with your tongue.

I need to add, apparently, (in comments) someone said I serve Sysco food products. That is a complete LIE. I have not purchased one single product from Sysco. Unlike most other local restaurants, I'm supporting local sellers and growers, including businesses owned by women.

I had Flannery's several years ago. It looked like we were served "hairy" chicken wings. It was weird and not pleasant. I gave them another shot about 3-4 years ago. I just can't get with their food.

A friend and I recently had dinner at your restaurant Joe, and we were impressed with your BBQ and cole slaw! There was so much on the roll that I ended up bringing half of it home with me to enjoy the next day! We plan to return soon and try some of your other items on the menu! Can't wait until nice weather comes along to be able to sit outside by your new pool bar!

Wow. Someone knows how to get your goat, and get some free advertising in the process.

Some observations as an unbiased outside observer who has never been to either of these establishments:

The cost of your smoker doesn't really factor into it. I've only done pulled pork in my crockpot (and it's delicious and juicy by the way)... so me having a crazy expensive smoker wouldn't really help me.

I've never eaten at Flannerys, as stated before, however they have all 5 star reviews on Yelp going back to 2014. Not saying that Joe's bbq isn't amazing... just saying that they have at least a 4 year history and track record. Truthfully, I don't know how long Flannerys has been around.

The sort of establishment you have wouldn't really factor into the tastiness of your bbq either. I've had some of the most incredible bbq at roadside stands with picnic tables in North Carolina... so.... there's that.

I'm sure both places have great pork bbq... might I suggest a double blind taste test to solve it once and for all?

Sounds like a challenge Joe. You up for it?? Might be good for business on both sides.

I'm up for any challenge. I simply have a problem with a loud mouth going on the Internet lying about two things. One, that he contacted me and I did not reply and two, that he claims he has a better product yet he's never been to my restaurant and tried my product. Why get into a pissing match with a skunk.

Please make the NC style vinegar not the bbq sauce

I find this funny. I remember when flannerys was on the corner of Main Street and 13. They didn't last long there. why go in a pissing match when you're (flannerys) is located south fruitland/Eden and not have a locally known establishment? Furthermore, why start something when your BBQ sucks? I support Joe all the way.

Pinch it 841...know it all. Mr. Joe, do let us know if/when a great "charitable" challenge is given/accepted. Opportunity to start the Endless Summer of 2019 with a bang!!!

I competed against this guy some time back and in many events we were in, the end of our lines were out of site and he had maybe two or three at his place. We had a Southern Pride smoker and had the best bar-b-q, pit beef, pit ham and pit turkey. We did events like the fireman's muster,furnace town plus many others. We had a big grill and used black strap molasses that created a mouth watering aroma in the air. Chef Fred worked with us and our products were so good and flavorful we almost ran out of product at every event. We would go through 14 to 22 top rounds of beef ranging in weight of 14 to 22 pounds at most events. I still see people who state they wish we were still in business.
In addition we would put our pork bar-b-q up against anyone and our sales and requests were out of site. Poor ole Chef Davis, he still tries.

Wear can i get nc style pulled pork good sandwhich.

Joe please understand poor Stewie is influenced by the local liberal socialist and butt buddies withe the likes of Day and all his cronies. Rode by his establishment one day and saw him and the biggest socialist ass**** Dan O'Hare outside having lunch, ALL 2 of them. Stewart's wife is a local school teacher so he's obligation is to all the new screw everybody policies these idiots come up with

Both of you, just get over it.

Smoked Goat tacos ! Sounds gross I know but they are really good.

Obviously you don’t know Mr Davis.He is friends with everyone. I also think he is single. Figure it out before you sell fake news...

Anonymous said...
Obviously you don’t know Mr Davis.He is friends with everyone. I also think he is single. Figure it out before you sell fake news...

And he is single for a reason!

As an FYI Joe, His name is Stewart Davis, not Stewart Flannery.

I've always thought stew was A nice guy, known him since he was a little kid. And a good dad.

Wow - there is enough room on the Shore for both of you. The funny thing is that it never says where Joe's restaurant is or the name of it in the article. Stewart is a nice guy, so is Joe. I don't understand why all the hate and mean things. CAn't we all just get along..............

Stew lies. Joe called him out on those lies. It's that simple. If you're angry at that, you're just plain wrong! Stew is the one who wanted to hurt Joe's business, and needlessly. If you've been living under a rock, Wendy's dishes it as much as they get it. If you're gonna troll a "competitor", you better be ready for the feedback. Not just from the business you're belittling, but its loyal patrons. Those who want to act all high and mighty are those who constantly troll this site, because they just plain SUCK.

Flannery. Got a deep fried turkey, once...

How is Stewart, being a nice person, post a call out to a business he's never been to, and is about 30 miles away. What is the point? To be mean, unprofessional, or just being an idiot. It's why he has virtually no business, located no where, and is just plain jealous.

i got a hamburger and fries when he was on main street and the dope fiend cook he had that day served me with the worse meal i have ever had. the fries were like they were coked the day before So Chef Stew should keep his lips closed about joe's place.

You can get one at “Dienda”

I agree..what a bunch of cry babies

I see Joe's point on this one. He went out on a limb and opened a business in a tough time of the season. He is just defending his product. I am sure if Stewart had said nothing there would be nothing. Stewart had a decent product one just had to have a taste for it. He was charging beach prices in Slumsbury. I wish you both the best but you are comparing apples and oranges. One is a sit down establishment with beverages. The other is a chuck wagon.