So Sears In Salisbury Is Closing, Who Gives A Crap? 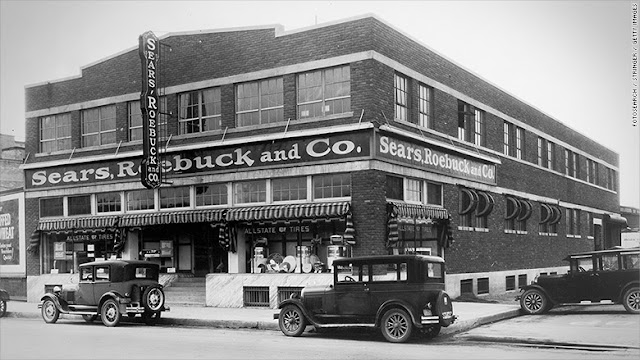 I know for me personally, I haven't shopped in a Sears Store in over 20 years. Outside of Craftsman tools, (which they lost that exclusivity years ago) what the hell does Sears have to offer, they're just a store, period.

Sears was one of the many companies that destroyed the local home town hardware stores. We stood there and watched companies like Sears and WalMart slowly kill local businesses and didn't do a thing about it. Instead, more people shopped there because the price was less, how do you like it now?

Amazon is now cornering the market by making sure, (within 10 years) you never visit another mall or store again. So what will you do about it this time? My guess, NOTHING. Idiots like Jake Day will watch the malls disappear, yet put out press releases expressing how commercial property values are on the rise, PLLLLLEASE!

Yeah, kinda like when Palmer Gillis bought the old Feldman's property on the river for $5,000.00. Yes, that's not a typo, I said five thousand dollars. Yet we are supposed to believe commercial properties are on the rise while the City keeps selling off parking lots for pennies on the dollar as well.

K-Mart and Sears are gone, big deal. Leave it to WBOC to find Idiots out there who will go on camera and talk about how this is such a hardship on our community.

Sears, you refused to keep up with the times, you failed, goodbye. The ONLY sorrow I will have about Sears closing in Salisbury is for the employees who will be out of so many jobs. Expect Jake Day to put out a press release next week stating how unemployment is at an all time low in Salisbury because so many Idiots will believe it.

Rewind to around 2008-2016 and this article would have read "waaaa waaaa, this is terrible and ita all Obamas fault" Lol

What is sad is that it is the end of an era: people shopping at Sear's, seeing friends and employees there, waiting for the Christmas Wish-book every year, etc. Not that Sear's didn't adapt, just that it was a part of our younger years, kind of like my '72 Beetle. Nothing special about it, just nostalgic.

The irony of Sear's demise is that they STARTED as a MAIL ORDER COMPANY, for God's sake and, then had one of the very first internet search engines: PRODIGY
Remember the computer dial tone while you fired up your Prodigy connection using your modem? Back then you used either Netscape or Prodigy. Google wasn't even a glimmer in anyone's eye at that time.
Sear's just couldn't see the future or refused to change. It's just sad.

Actually craftsman has list a lot of luster as well

The only actual stores that seem to thrive on the Eastern Shore are outlets like Rehoboth Tanger Outlets. If Jake would do something like that we would generate business and Salisbury $ would not be going to Delaware, even though they are tax free. We have the old area where the old mall used to be not utilized, so many new stores are built rather old sites being used, it's just a waste.

Times are changing all across the country with anchor stores closing in Malls. Big box stores falling by the wayside. This is not just a Salisbury problem.

My 12 year old grandson said when Toys R Us closed, he was sad to see it close. His children and grandchildren would not have the fun times he did when shopping in Toys R Us, spending Birthday or Christmas money, or picking out presents for a wish list.

Times do change, some for good, some we miss, when down the road we will say "remember when". I will miss Sears but like many in the nation I too do a good bit of shopping on line now. Can't have your cake and eat it too.

Jobs will be lost, which is always unfortunate and even quite sad for those directly impacted. I would love to see a makers space in Salisbury! Look it up. It’s a space where people with ideas can go to experiment and refine design of new products. It’s a great way to encourage entrapeneurship.

should have closed years ago!

The company went bankrupt during that time period

Just one step closer to Salisbury fulfilling my saying of 20 years. Salisbury the new Baltimore. We have empty properties, drugs abundant, gangs ruling the Police and a very dangerous City. Like I have been saying I don't go into Salisbury unless necessary and I do carry for me and my Families safety.

December 29, 2018 at 9:25 AM
He is too busy being laser focused on the one block downtown while the rest of his city burns

Everywhere I look I see apartment buildings going up but not many single family homes and certainly no single family home projects. That doesn't leave me to believe we are a thriving and prosperous area in which to raise a family and educate children. Without some industry the area will keep going down.

Sears and Kmart have been done for some time. Now watch the slow end to the mall without the anchor store and rent Sears provided.

9:45 is right. I have been to NextFab in Wilmington and Philly they have a lot of equipment and people interested in new ideas.

Why do businesses thrive?

When they have something no one else has like better prices, selection, convenience, service.. And managers who know what they heck they're doing.

Nationwide, in any industry, managers don't know what they're doing and are only looking to advance and secure themselves.

Two years at Christmas I went to the Centre at Salisbury looking for a microwave turntable. Ended up getting it online. I went through Sears and it was so desolate you could have roller skated through the aisles.

Boscov's ,however, was bustling. Maybe their managers know how to run things.

Walmart is busy but is really starting to suck.Yesterday at Salisbury store shelves,racks, and displays were still empty. Once again I ordered what I wanted online.
Cambridge's Walmart is worse and even employees I have talked to think it is lousy. Unstocked shelves, aisles a wreck, higher prices.

Watchful eyes on consumers and innovation are good ingredients in business.

Sears is the result of bad management and theft. They were so big for so long that management had to be throwing money out the windows while paying themselves too much.

I suppose the executives are still the $19 million bonuses for a job well done. Corporate greed is one of the major factors killing America

Sears shelves have been half bare since September.

walmart not longer cares about walk in customers. it's all online. even Christmas trees were online only this year

Who cares if they close

Many malls will not miss stores like Sears. They are 'anchor' stores which are given quite low rents in order to attract various other retailers who pay substantially higher rent. Now the malls can rent out the old Sears footage at higher rents to smaller retailers.

I went to Sears 5 years ago to buy a TV. The first 3 I asked about were not in stock. So I asked which TV's they had in stock and I was told they had 3. There were at least 25 on the sales floor and they had 3 in stock. That was the last time I went in that store.

Sears, Walmart, etc., started out small and grew with smart owners and managers with a vision and a plan. Remember the excitement when we would receive the annual Sears Christmas catalogs? Bad business practices including too many managers sitting behind desks and not in the stores or restaurants are what makes businesses fail. Number one rule is to listen to your customers.

Does anyone recall the small Sears stores that were in some local towns?They sold appliances,tools,lawn mowers,etc,but not anything like clothes.I haven't seen one in years.

You should come do a story on the section8 complex going up off Merritt mill in Salisbury and do some research on why it is going up there.....I guarantee there a big story there.....

I worked in the electronics Dept there for a very long time .we never had only 3 TV's in stock . Not saying you are lying just maybe you got a lazy associate who didn't want to go look or something .

There was a small sears in seaford

Thing is when all this online shopping becomes a big thing, and people are out of jobs, where is the money going to come from to shop online? Online shopping will kill it's self too. I would rather shop in a store than online. I can buy what I want in town and bring it home, if I buy it online, I have to wait about 2 weeks to get it. And if it's broke or wrong, return it and wait 6 weeks to get one back.