Will Smith: It's important 'to speak out about the insanity' surrounding U.S. election 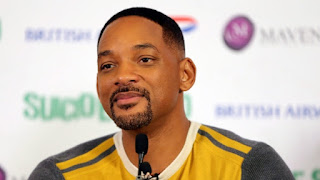 DUBAI, United Arab Emirates -- Will Smith was in the Middle East on Sunday promoting the movie "Suicide Squad", but the Hollywood star said his time in Dubai is also a chance to counter an increasingly anti-Muslim climate surrounding the U.S. presidential race.

Smith, who plays the sharpshooter Deadshot in the film, said he's having fun and tweeting pictures of his time in Dubai, showing that "Hey, it doesn't look like they hate me, does it?"

"In terms of Islamophobia in America, for me that's why it's important to show up," he said.

He encouraged local film makers and producers to find more ways to tell the story of the region to the world.

"The Middle East can't allow Fox News to be the arbiter of the imagery, you know. So cinema is a huge way to be able to deliver the truth of the soul of a place to a global audience," he said.

did h ask them to give rghts to women? gays? ect ect?

Dave T: That's great Will ! Thanks for the sage advice. Must a be a really nice view from your ivory tower. I guess I'll put on my rose colored glasses and pretend that radical Islamic extremists are just friendly, warm, loving souls who have a soft spot for infidels. I guess those nasty be-headings, tortures and crucifixions were just a figment of my imagination. Silly me.

Hope the black loud mouth looses what little career he has left. He needs to take a look at Jane Fonda, Dixie Hoes, etc. He has no relevance at all. Stay where you are dummy.

This is just another air head Hollywood type. you can't fix stupid.

Hey, it doesn't look like they hate me, does it?"

how many armed security guards do you have Will?

He said he was embarressed to be from the United States; I respectfully request him to stay where the hell he is. He also at one point was that tax evader!

Seriously, why does his opinion matter???

Smith is a minion of Hollywood and is probably mind controlled to say the things he says. He is naïve at best, and a shill for the globalists at worst.

The government created and funded / trained Al Queda. That is a fact. Tim Osmond was CIA and managed the Mujahadeem in Afghanistan. Osama Bin Laden helped the CIA defend the poppy fields against the Soviet Army. The CIA is a criminal drug running organization for the bankers. The Taliban was destroying the poppies because they are actually religious people. They don't believe in recreational drug use and suppressed the poppy production. That is why they were attacked. Now we have heroin in every small town of America.

We should all be ashamed of this murderous government and we need to stop supporting it. Start by advising our young men to STOP joining the military. That will go a long way toward dismantling the war machine.

Every time an actors' career goes to crap they start mouthing off about politics.They don't understand that a bad attitude cost them roles in the first place.And when they do get a role fewer people pay to see the finished product.I never will forget the hoopla surrounding that ridiculous movie where the 2 guys went to North Korea to kill their President.The 2 main stars talked so much trash that theaters actually boycotted it.

Dubai in the UAE is the most westernized of the Arab countries so of course he'll be safe there. My cousin, who is a cute blond caucasian in her mid-twenties, lives in Dubai and absolutely loves it (that is until ISIS finally trains its sights on the party capital of the middle-east). Then I expect her to come home.

Not all of the Muslim world is bad but there are certain groups of Muslims that truly mean to do everyone a lot of harm and those are the ones that need to be eradicated with a .223 and not a hug, that is unless you prefer squeezing them to death.

So will is pretending to be a sharp shooter. Using a fake gun on a fake set fake blood fake tears. He just slapped every American Family in the face that has fallen victim to radical Islam. I will never watch a movie again that he is in. In my opinion he is a terrorist sympathizer

He is a POMPASS has been.

Typical black from Philly. I guess he did it ALL,on his own. No help from no one. Well jackals take you and your entire non acting family to Canada with the rest of the lowlife.

Anonymous Anonymous said...
Hope the black loud mouth looses what little career he has left. He needs to take a look at Jane Fonda, Dixie Hoes, etc. He has no relevance at all. Stay where you are dummy.

You have the nerve to call someone a dummy and this is what you post, spelling error and all, to convince us YOU are superior?! lmao. Stay where YOU are, dunce.

Ps his son is a cupcake.

He and his racist wife have made millions in country that holds them back lol. Hypocrite liberal loser. Hope he and Jada move to the Middle East. I will never watch or listen to a word this divider says. Is Black America really this stupid. WTF people educate and prosper just like he did I wish I had it so bad. What a hypocrite as thousands in his old neighborhood struggle to eat he pockets millions. Yep he is a fine spokesmen for America.

The holy texts of Islam are saturated with verses of violence and hatred toward those outside the faith, as well as the aforementioned "hypocrites" (Muslims who don't act like Muslims). In sharp contrast to the Bible, which generally moves from relatively violent episodes to far more peaceful mandates, the Quran travels the exact opposite path (violence is first forbidden, then permitted, then mandatory). The handful of earlier verses that speak of tolerance are overwhelmed by an avalanche of later ones that carry a much different message. While Old Testament verses of blood and guts are generally bound by historical context within the text itself, Quranic imperatives to violence usually appear open-ended and subject to personal interpretation.

From the history of the faith to its most sacred writings, those who want to believe in "peaceful Islam" have a lot more to ignore than do the terrorists. By any objective measure, the "Religion of Peace" has been the harshest, bloodiest religion the world has ever known. In Islam there is no peace unless Muslims have power

not quite understanding , islam is a religion that follows the kuran or curan however you want to spell it . A true follower of this book tells them to kill any and all non believers of the islam religion . Having said that , I don't have any trust or want any muslim in my country , the U.S. of America .
It's very simple , they hate us so , stay away. I will not bend to them or their American leader "Obama".

That's funny Will, they would behead your son for his dress wearing. What a globalist mouthpiece.

Your cousin better hope she isn't raped there, lest she be imprisoned, caned and flogged or worse for the "crime" of "enticing" a "good Muslim man" to rape her.

Hey guys, I never said thst I understood it but I feel that so long as the money is good and that ISIS is not looking their way, that the majority of the people of Dubai "might" be ok. I would not say the same thing about Saudi Arabia and definitely not about Yemen or Qatar.

What was said by anonymous 750 PM; I'd prefer that we leave them in there own countries of origin because of the very small percentage of them who want to cause harm to the U.S.. We all know that the "peaceful ones" will not turn in the bad ones so in my book they are guilty through association.

Multiculturalism is going to byte us all in the rectum!

I have been there and it is safer than any city I have visited in the US. People are friendly, there is no trash or litter and some of the best nightlife.


He's a dolt. My action plan is simple for actors and entertainers like him. Avoid his movies and DVDs. Keep my smile and my cash. Vote with your wallet.

Spot on! Afghanistan accounted for approx 7% of poppy production world wide prior 9/11. Afghanistan is now responsible for 90% +
Eisenhower warned of the threat of the military industrial complex. The same criminal element that stood down for 9/11, pulled off the Kennedy assassination, Benghazi, Fast and Furious, Iran Contra Scandal, Operation Gladeo, Regime change in Iran in the 70's, funded Saddam in the 80's, fund regime change in the Ukraine, and on and on for decades now. Trump 2016

No talent Smith. A token in Hollywood.

And there still isn't peace, at least not for long. Then they start killing each other for being the "wrong type" of Muslim, or not Muslim enough.

Given Will Smith's carer is in the dumper, this seems like an inopportune time to be spewing garbage and bad mouthing his country. Didn't he do enough damage when he and his idiot wife complained about the Oscars last Winter? Now this? He really needs to learn from Jane Fonda's fate with Vietnam veterans and just shut up!

Will smith is a fraud.

piss off willie, dont like you or your movies! so how cars what you think!

And the KKK calls themselves Christians...so is Christanity a racists religion? Is every white Christian a terrorist?

12:19
You should have just kept quiet. Please show me in the New Testament where Christianity tells people to be racist. The fact is you won't find it because it doesn't exist. People can claim to be anything they want but if they are not following the bible they are sinners. There are several verses in the quran that says they are allowed to kill the non believer. They will tell you they are not allowed to kill an innocent person. However the quran says people are not innocent if they are not muslim. Read both books and gave back to me.

he can go pound sand with a broken coke bottle.