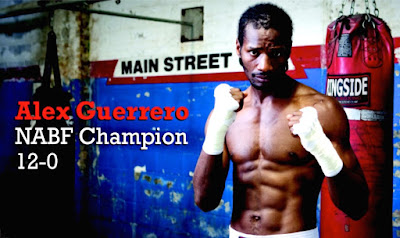 Alexis "Double Barrel' Guerrero will be defending his NABA title on Sept 19th at the Resorts World Casino in Queens N.Y. Guerrero will take on a tough foe in Brian Howard 9-1 of Atlanta GA. Guerrero is coming off an 8th round stoppage of Anthony 'Boom Boom" Farante of Philadelphia, while Howard is coming of a loss to Harvey Jolly.

This will be Guerrero's first fight under his new management team of Dibella Entertainment and his first fight in the Big Apple. When asked how about these new changes, Guerrero said," as far as where I fight, there is home and everywhere else, Nothing is like fighting in from to your hometown but everything else is only about the fight and what is happening in the ring. At that point the ring is an island separate from everywhere. As far a being with Dibella Entertainment, this it for me and my trainer and manager Hal Chernoff could not have done better to get me the best opportunity to succeed as a boxer. Your career starts out wide open but everything gets more important and narrower with each fight, so these next few fight are critical for me stating with this one. Signing with Dibella has given me the such a lift because now I know I can go for it. As long as I do my job I know they can get there job done, they are serious players in the boxing game and Lou Dibella is a very smart business man and his business is boxing. He is so connected to boxing he even was asked to play a part in the movie Southpaw.

"As far a my opponent, We have had a couple changes in opponents and it causes you to adjust your training some but I am pretty flexible and am fortunate enough to have some physical attributes that lets me pick and choose how I want to fight. I can bang on the inside and enjoy that but we also train a lot to fight in the outside and can mix and match. I am just eager to get in the ring and start this leg of my career."
at 9/14/2015 09:07:00 AM