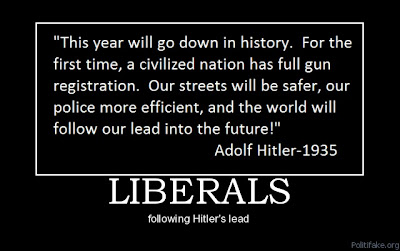 Hitler never said this, nor would he have needed to, since the Weimar Republic had long since banished private gun ownership. Just saying.

I'm not either one of you but I did do a search on this subject. I found multiple sites proving Hitler did NOT say this.

And the reason given was as the one commenter said, the Weimar government already passed laws such as that. Mainly trying to disarm Nazi's.

(3) Major changes to the German gun laws occurred in 1928 and 1931 (under the Weimar Republic) and in 1938 (under the Nazi’s). No significant changes happened in the gun registration laws in 1935. Furthermore, the changes in 1928 and 1931 were designed to disarm the Nazis and Communists and therefore it is doubtful that Hitler would trumpet the success of any law aimed at his goon squads.

Hitler didn't have ANY problem with the law after he came tom power though, did he? Sure did make his job (murdering people by the MIILIONS, crushing dissent by murdering ENTIRE towns (fact check THAT, you liberal pansies), murdering his OWN CITIZENS -- with guns) a whole lot easier, huh? The bleeding hearts of THAT generation (look up Neville Chamberlain, you pansies, and see how THAT turned out) thought that Hitler wasn't so bad. HITLER just laughed. And killed them, too. He HATED those mean diatribes in the local papers. But the writers thought he would listen, huh? none of those writers are still alive (most didn't live past 1944), but they have been replaced by a new generation of complete and utter idiots. More editorials about our freedom, please.

Never said he didn't use the laws to his advantage, just said he never uttered that quote.

He didn't have to. It was done before he got into power.